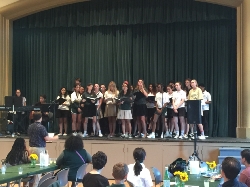 Not since 2006 has the Performing Arts department taken on two musicals in one year, when the students performed Bye Bye Birdie and Little Shop of Horrors. Nearly ten years later, during the annual Performing Arts Mixer in the auditorium last week, the announcement rang out that this year would again include two musicals: The 25th Annual Putnam Spelling Bee and Legally Blonde, Jr.
Kate Janson, the Director of Performing Arts, was uplifted by the crowd's reaction to the news. "Based on the turnout at our Fall Mixer, just seeing our veteran supporters and a large number of new faces to the Performing Arts, this is going to be a very exciting season. I can already feel the buzz on campus, and the enjoyment that the performing arts will be bringing to the SMCHS community." Janson said she wanted to give a special thanks to the Performing Arts Association for making the event such a success.
Auditions for The 25th Annual Putnam Spelling Bee will be on Wed. 9/2 at 3pm in the auditorium. Students must fill out an audition form and submit back to Ms. Janson by 8/31 if they want to be put on the audition list.
Published August 31, 2015 Print